The holidays were crazy. Instead of opening presents, we were putting the finishing touches on the mobile version of Triple Town. Some late nights all around. Big kudos to Cliff Owen for doing an immense amount of the heavy lifting.

If you love Triple Town, please download it (it is free) and rate it. We are in a bit of a David and Goliath situation here since a very large and nasty company copied Triple Town on mobile right at the end of December. We’re a small team and we work hard, but moving to the phone took a few precious months. I don’t quite know how to express the feeling of bleeding our lives out trying to finish the game…all while watching a soulless shark lavishly spend VC cash to ride up the chart. Using my own design. That was like a punch in the gut. Betrayal, violation and powerlessness all wrapped up into one unpleasant emotion. This has easily been one of the most emotionally difficult releases I’ve ever done.

To add insult to injury, the night we got ready to upload the Android version we made an awkward discovery: There was already a game called Triple Town being sold by a certain Mr. WangYang.  In fact, it was Triple Town.  The art was ripped from the web version.  The logo was the same.  Check out that screenshot…captured for posterity.  I want to send big thank you to Google.  Even though their offices had closed for the night, they took down the fake immediately.  That was deeply appreciated. 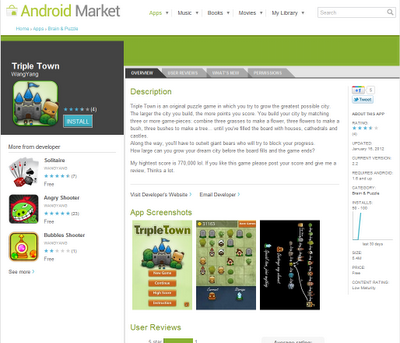 Ripped off: An example of a counterfeit game.

The best and most positive thing anyone who loves innovative indie games can do is spread the word about the original. Share the link. Download Triple Town. Write a review. Tell your friends. Heck, I tell strangers in coffee shops.

No one ever complains since a good indie game is an authentic joy. The next time I see someone after introducing them to Triple Town, all they ever want to talk about is Triple Town. It becomes an essential part of their life. It doesn’t matter that it was done by a few guys working out of home offices. All that matters is that it is a good, original game that players love. I figure the Fast Follower bastards may have money and evil on their side, but maybe a passionate community and some word of mouth about a decent game can carve a small space for the little guys.

Big thanks for all the continued requests asking us to make Triple Town for mobile. It kept me going.

PS: Also a lot of folks told me they just wanted to ‘buy the damned thing’. So even though the game is still free if you want, you can now pay once and get unlimited turns.