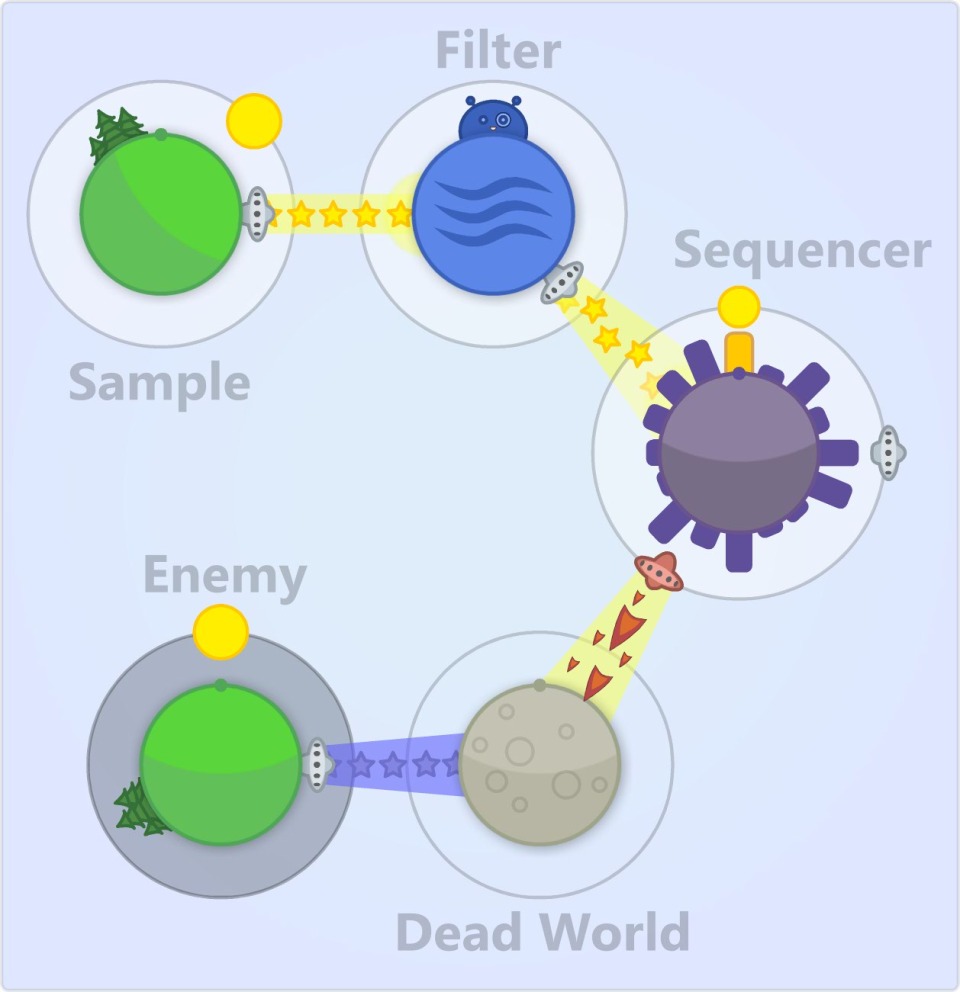 Yesterday morning I woke up from one of those startlingly lucid dreams where I was playing a completed game design. I tell my wife that odd ideas are like exotic fruit and if you fail to jot them down, they will rot away, never to be tasted again. So here are my quickly captured notes of what is, literally, a dream game of mine. 🙂

Imagine, if you will, a space strategy game. You start out with a single planet surrounded by hostile enemy planets. Your goal is to clear the map of enemies and create a galaxy spanning civilization. All pretty standard stuff.

The difference is that you fight and grow using music that you compose by building your empire. This is where it gets trippy.

Planets as sequencers
Watch this movie clip of a multi-touch music creation tool. It is wonderfully bizarre.

The basic gist, multi-touch madness aside, is that smart objects positioned on a flat screen can be used to create music. Link them together using a directed graph and you have a pretty competent music sequencer and sound effects generator.

The game design leap is that these objects can also be planets in a strategy game. Each planet has a different effect.

Throughout the design, you’ll see that every element can be seen in two ways. One is as an element of a song. Two is as part of a game.

Linking planets
Each planet has a space port. You can drag a space lane from a space port to another nearby planet.

In the process, you connect a sound source to a sound processor. In very short order, just by linking up space lanes, you can create a giant sequenced sound machine. At the same time, you are directing trade and setting up your space empire.

Setting properties on planets
Each planet is a fanciful user interface that lets you adjust the properties of the filter.

Music = culture = resource
Each planet produces a sound. Some generate sounds. Others take in sounds and modify them. The stream of sounds produced by your planets is what most folks would call music. It also represents ‘culture’ in the game. Culture is the resource that makes everything in the game work.

Culture pools in planets that are the final destination of sound streams. They collect it in real time. Culture can be spent on upgrading your planets and creating war ships, defending against attacks.

The enemy does not sleep
You are not alone in the universe. There are other planets on the fringes of your empire. They send ships to destroy your civilized worlds and knock them back into desolate husks. They’ll disturb your carefully calculated rhythms, disrupt trade routes and generally cause your empire to devolve into chaos, then silence.

If a planet is attacked enough, it will be turned into a dead world, devoid of music.

Spending culture
Luckily, you can use your culture to both defend, fight back and ultimately conquer the enemy planets.

At first you defend against attacks. Then you fight back. Eventually you conquer the enemies and make their worlds yours.

The benefits of conquest
Conquest is great. Capturing new worlds allow you to build more complex sequences of sound. This means more interesting songs. It also means that culture accumulates faster and allows you to expand your empire further.

Some planets have tidbits of plot, mysteries, single use powerups, treasures and other rewards. Conquest advances the player in the game.

Culture is multiplied by audience appreciation
An empire is a song. As a song it can be shared with your friends outside of the game. At any point, you can send a link to your empire to a friend. They can check it out and simply by the act of listening to your song, your empire gains marvelous bonuses.

A game that encourages the creation of great songs
The game is balanced to encourage this. During the early stages of creating your empire, there is enough culture in random combinations of planets to conquer a fair portion of the map. Eventually, you start running out of culture. You’ll come across powerful enemies that you cannot defeat unless you start sharing your songs with others.

Good songs, as judged by an audience of your peers, will gain you greater rewards than random garbled messes of sound. Judging music is hard for a computer. However, it is easyier for people. The design harnesses your friends as our AI judgment algorithm to encourage and reward the user to become a great composer.

The enemy as a tutorial
The map creation for the game is tricky since it serves two purposes. The first is to provide a challenge to the player. This is pretty straight forward level design and deals with choke points, resources, power ups etc.

When the player conquers the enemy worlds, they are essentially deconstructing the level designer’s song filter node by filter node. The player is then asked to put their newly acquired node to use. The easiest thing would be to replicate what was already done.

What we have is an experiential lesson in music composition masquerading as a game.

Conclusion
I finally got around to reading Rules of Play by Katie Salen and Eric Zimmerman. The tome repeatedly emphasizes that you can analyze a single game through multiple perspectives. Celestial Music is a game that is two things simultaneously. It is a strategy and it is a music creation tool. It is also, by the fact that is both of these things, a system for exploring and learning music in a user friendly manner.

As I awoke groggily from my dream yesterday, I was left with the amazing memory of playing this quirky game. Sound and visuals flowed throughout the screen like some clockwork instrument pulse with life. There was no real distinction between building something beautiful and playing an enthralling game. Delightful.

Human computation
Humans are far better at some activities than computers. Luis von Ahn is a computer scientist at Carnegie Mellon that studies how to tap into the abilities of people to solve hard problems like image recognition or human identification. He uses games as his medium. The fact that people are better than computers at determining what is meaningful music is leveraged in the Celestial Music design.
http://video.google.com/videoplay?docid=-8246463980976635143