Update (6/6/07)
Ezin has made the source to his delightful Flash-based prototype available. If you want a jump start on how tile layout and shadows work, this is a great starting place. Thanks, Ezin!

Folks have been busy! The PlanetCute prototypes got off to a great start last week and there is still some great work being done with the SpaceCute concept. I count 11 glorious links to check out and analyze. If I missed any, let me know. Big kudos to everyone who has participated so far.

Think of these as inspiration for your next iteration. The challenge goes on. Each example here was done in a few stolen hours over the course of a week or two, so the challenge has proven itself to be quite feasible. For those with little time, I find it heartening to realize that the real trick to making a game is simple. Consciously set aside a few hours each week and create something.

As promised, here they are…

Sokoban, baby
Kev over at cokeandcode.com built this wonderfully polished sokoban game that add the additional madness of height to the puzzle. I still can’t get by level 2, but the first level had me grinning. 🙂

My Game Builder: Web-based game editor
The creative team over at Jolly Good Idea is using PlanetCute tiles in their amazingly extensive online game building tool. This is a great example of Flex in action. It was created by one programmer in his spare time over the course of half a year. There is a full on pixel editor, mapping tool and system of setting up basic game mechanics.

Quarry game
Brwn 2.0 (aka Ahad L. Amdani) posted a game of his that used a similar stacking mechanic. It is a good source of inspiration and shows how stacking can be combined with cute little semi-autonomous agents.

PlanetCute in 3D!
n.n. listened to the feedback about the perspective and height and wondered what the game would be like in full 3D. I can’t wait to see where this goes.

Terrain effects and patterns in GodCute
Ezin is closing in on getting the core mechanic working. He has the terrain moving up and running. The shadow system is in place. He’s added a wonderful set of terrain rules that result in grass growing over exposed dirt and stones sinking into water.

Shadows and vertical tile movement in GodCute
Corsix extended his wonderful little editor to include some of the concept of moving tiles around. He also implemented the shadow system to great effect. In particular, we see the inclusion tiles moving up and down independent of the grid. This is an effect that I suspect can be quite useful as we move forward in the prototyping. Just because the tiles are blocks doesn’t mean that all mechanics need to take place on a grid.

Phage: Game demo
Matt came up with an interesting variation on Every Extend. He says “The object of Bacteriophage is to kill as many bacteria with each available Phage as you can. You begin with 10 Phages. Simply move your Phage to the place of your choice on the screen, preferably near large numbers of bacteria, and left-click to blow it up. Right click to randomize the field for better shot looks. Your phage will detonate and expand for a brief time before vanishing, killing any bacteria that overlap or come too near it. You get increasing numbers of phages as bonuses for “fighting off” a series of bacterial infections each 5 levels, so use your phages wisely.”

Why shadows matter (and first prototype!)
Bjoernke started things off with this great demonstration of how hard it is to correctly interpet height when the shadows tiles aren’t used. 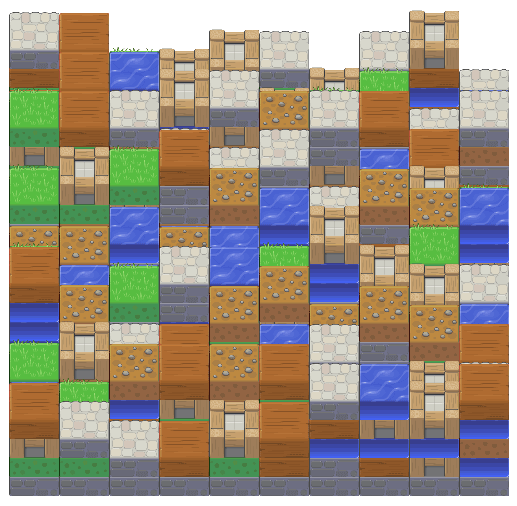 Perspective is confusing
Hunty came to a similar conclusion with his Flash-based demo. He raises the very interesting point that perhaps the perspective is inherently flawed. This point spawns some good discussion and leads to improved shadows, better map generation and how the limitations of the perspective can be used to benefit the game.

SpaceCute lives! And Thrives!
And last, but certainly not least, Scooter over at 2bitarcade.com produced a very polished SpaceCute prototype. Love the stars and the bounciness when you hit something.

Till the next crop…
Wow. You are all amazingly creative and productive. Remember however, this is just the beginning. Once the basic engines are up and running, that is when the real fun begins. I’m looking forward to seeing more experiments with the basic mechanics of the game. The core activitity of moving blocks is remarkably enjoyable by itself. Now is the time to wrap a game around that. Just ask the following questions: