The initial round of SpaceCute prototypes are in and results are encouraging. Both basic movement and some initial combat was prototyped. Each one of these guys is a prototyping superstar. It is educational to see all their different interpretations of the starting concept. You can download their glorious efforts here: 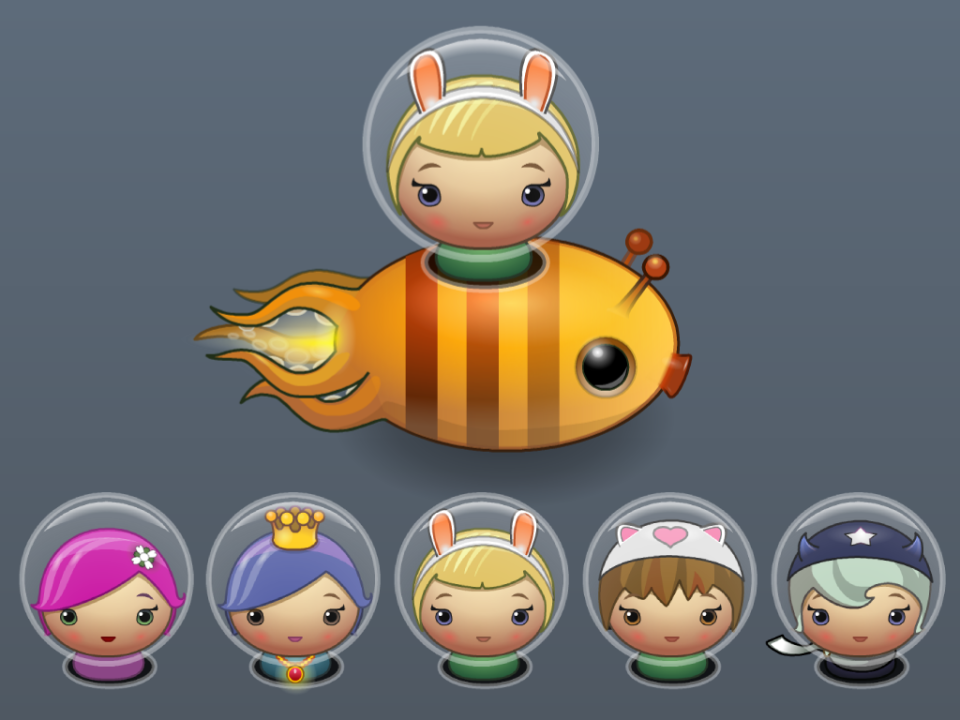 I’ve also provided a new set of graphics that include more ‘cute’ faces and one new ship (inspired by Vorlons.) You can mix and match hair and and accessories to get the look you desire. Download the latest set, complete with PNG and original .design files here:

Answering the big questions
You can think of prototyping as a pseudo-scientific process of experimentation. For each prototype, you are looking for the following:

With this framework in mind, let’s look at the prototypes. Our two big questions are “Is moving fun?” and “Is combat fun?”

Is moving fun?
I think the answer is yes. I spent far too much time flinging space craft around the board despite there being little reason. This is one of our lowest level game mechanics so it is important to get it right.

Opportunities
Based off the various prototypes, it feels like movement is pretty solid. There was one interesting variation suggested:

Is combat fun?
In general, combat is only mildly fun. Ships bonk into one another and slug it out, but player choices don’t seem all that interesting. Combat suffers from a typical problem that strikes almost all prototypes at some point:

Opportunities
The obvious step for most of the prototypes is to make combat enjoyable. Folks are building up some lovely engines that are capable of all the basics such as collision, movement and state changes. This is where the engine programmers get seperated from the game programmers since most of the upcoming work deals with very little technology and a whole lot of tweaking of game systems.

I chose the following opportunities for combat based of these two criteria:

Add a turn button: I perhaps simplified the initial design too much. It is worth prototyping up a turn button that allows you to move all or some of your units during your turn. Does the players strategic options increase dramatically?

Collisions need a little pizazz: Currently collisions don’t let you know that something interesting happened. Having the unit flash red (and fade back to normal) or having particle spit out of the collision point could help. Mordraks particle effects or Ben’s floating heart are great ideas that could be extended to the collision feedback. The sound effects help immensely. Is collision feedback delightful?

For the explosion, you can use a simple expanding circle with particle effect. Be sure to make the ships give the user feedback when they are hit. Woot, unit type number 2.

Resources and Powerups: One common technique to make a mechanic interesting is to tie mastery to the acquisition of a tool or resource. Imagine that ships spit out stars when smacked. These stars are sucked up by close by attacker ships and act as resources. Get enough resources and one of your ships randomly gets a powerup for a turn or two. Simple powerups include “super mass” that sends enemy ships (and planets!) flying, or perhaps “Astroglide” that lets you zoom extra long distances.

Now we have an interesting opportunity for rewarding combos. When players do multiple points of damage, they get star multipliers. When a ship finally loses all its hearts, it bursts into an explosion of stars. That means more powerups and more interesting choices.

I’m sure you have other ingenious ideas. Go for it! Post them in these threads. If you haven’t submitted your prototype yet, no worries. Steal the best ideas from the other guys and try your own twist on the concept. There are tons of options that haven’t been tried. And above all, play the prototypes…it is a great opportunity to give some real critiques of games in progress.

As a side note, SpaceCute didn’t exist as a search term a little while ago. Now Google has 308 references. I figure I’ll just keep making graphics and pimping your prototypes as they come in. My hope is that overtime SpaceCute is only going to get bigger and more pervasive. (Isn’t this is a lot of fun? 🙂