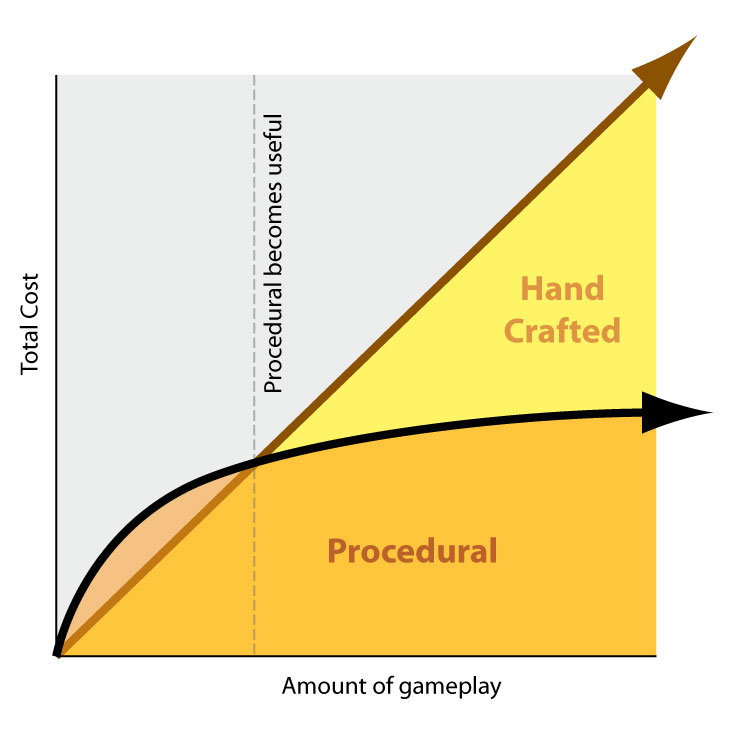 The more handcrafted content you build, the more it costs. There are few economies of scale. Want a new level? Add a couple more monkey designers and artists to the team. Want a higher level of detail? Add some more team members. Procedural content has the benefit that despite an initial start up costs, you get immense amounts of content for little to no incremental cost. Procedural content also is inherently more agile friendly than handcrafted content. It can be refactored, unit tested and evolved in an iterative process that lets you try out new ideas quickly.

The problem with hand crafted throwaway content
If we look at content from a rewards perspective, you can classify content in games into two main buckets:

Handcrafted content is expensive in bulk, but it has another issue: it is incredibly difficult modify quickly. If you build a clown and then decide that a rapid zombie dog works later, you are forced to rework the models and animations completely from the ground up. You can lose month when you decide to alter your static content. Great game play comes about through rapid cycles of prototyping and playtesting. Visuals, settings and level design are feedback mechanisms like any other and need to be adjusted and iterated upon just as much as the algorithmic simulation underneath.

The more handcrafted, throwaway content that you have, the less agile your development process will be. This dramatically increases the chance that you will fail to converge upon enjoyable gameplay. It also dramatically increases the chance that you’ll fall back on conservative game mechanics because the act of trying something new is too bloody expensive.

If you are on a budget, you should start identifying throwaway content and figuring out ways to remove it from your design. It may seem like a great idea to have a clown appear in a scripted scene where he describes his life story. However the incremental value to the customer is rarely worth the cost of production or the loss of project agility.

You’ll find a lot of procedural content generation techniques that fit the bill. These are rarely up to par with the best hand crafted assets, but they will work in a pinch often at a much lower cost.

Using procedural content to augment reusable content
The second face of procedural content is where it is integral to a reusable game mechanic. In NetHack, the act of exploring the dungeons and coming across different configurations of monsters and items is crucial to the player’s slow but steady unraveling of the immensely complex system underlying the game. Each level was somewhat disposable, but the map generation system was actually an intricately balanced algorithmic method of putting the player in unique initial conditions that helped maximize their learning of new skills.

In a card game, the randomness of shuffling the deck and dealing the players an interesting distribution of cards has a big impact on the gameplay that follows. You simply could not play the game without this element of algorithmic level design. Players would figure out the predictable set of hands and all challenge would be removed.

Ze sum uppery
The phrase “Content is Bad” is of course hyperbolic. To rephrase it, too much handcrafted throw away content is expensive and decreases the teams agility. Procedural content is one solution, but if there is anything I’d take away from this essay, it is the broader concept of creating agile, refactorable content.

If you are smart, your design will change dramatically over the course of development. You’ll discover a hundred little tweaks that end up making your final game far better than the initial design. Always be on the lookout for content that you can refactor in some way so that you can change it more cheaply.

Always maintain the ability to make a change to game play and test it with users within the next hour. If content becomes a barrier to this goal, you need to refactor your content-based systems. Be brutal in enforcing this rule, no matter how much you like that cutscene with the clown. It could save your team and your game.

The plague of handcrafted content is only going to get worse in the future. A friend mentioned that a level in his previous game took 2 days to assemble. Now, with the advance in customer expectations, it takes their team two months to build a level. If it costs that much to build a level from scratch, think of the pain involved in propagating a substantial late game design change throughout a series of levels. I can’t help but wonder what their production schedule might have looked like if instead they had adopted the philosophy that “Content is bad.”

“Procedural technique is another name for tool.”
Jason Booth has a wonderful essay that talk about how much of what we call procedural content is really just another name for tools. They leverage a small bit of creative content to create a lot of gameplay, but they still need to be used in a creative fashion. There is no magic ‘make me a world button’ and the folks that take this attitude tend to give the whole concept a bad name.
https://web.archive.org/web/20070219025333/http://jbooth.blogspot.com/2007/02/procedural-content.html

Introversion discusses procedural generation
The originators of the phase “Content. Is. Bad.” They should make a t-shirt with that phase on the back and my favorite character design of all time on the front: “@”
https://www.gamecareerguide.com/features/336/procedural_content_.php?page=1

NetHack
One of the grand daddies of procedural content done well.
http://www.nethack.org/

Desert Bus
A game by Penn and Teller that illustrates the problem of gameplay density quite succinctly.
https://en.wikipedia.org/wiki/Penn_&_Teller’s_Smoke_and_Mirrors

Thought experiment: Tiles as an early form of procedural content
“But most games that use procedural content suck” I recommend folks look at games like Zelda or Mario Brothers. Tiles were a huge innovation that allowed the developer to convey complex concepts (like walls, doors, tapestries, rocks, etc) without drawing ever single scene by hand. Instead you create a few modular pieces and then arrange the initial conditions of those pieces in an interesting way. You only use a small core of handcrafted seed data to build some truly enormous worlds.

This may seem like ‘not true procedural generation’, but compare it to the other popular alternative of the day: Drawing out every screen by hand. The genre that relied upon this technique, graphic adventures, was pushed into niche status. It simply could not compete economically with the richly interactive environments and economic efficiency of procedural techniques like tile-based environments. Food for thought.
http://tonypa.pri.ee/tbw/tut00.html