While we were in Japan earlier this month, Aya’s brother gave her “DS Training for Adults: Work your Brain” (Kahashima Ryuuta Kyouju no Nou wo Kitaeru Otona no DS Training). Oni-san, this article is dedicated to you!

DS Training for Adults is yet another a truly fascinating game title that straddles the edge between pure entertainment and practical software. The direct translation of the Japanese title is a good description of what to expect: ‘Whip your brain into shape under the supervision of Professor Ryuta Kawashima of Tohoku University’s Advanced Science and Technology Joint Research Center”

At first glance, DS Training for Adults is a very simple quiz game that was built in under 4-months. It also happens to be a runaway commercial success in Japan, selling over 500,000 copies and show no signs of slowing down. What is happening here?

Game Anthropology
DS Training for Adults is one of the most clear cut cases of a game serving a market need that I have ever seen.

We have a market that skews towards older non-gamers. The problem we are solving is very important to them. Most are horrified at the thought of losing their mental capacity and would pay exorbitant amounts of money if there was a proven alternative. 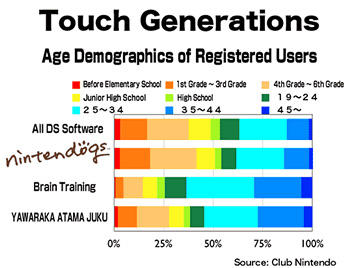 And did I mention that no one else is serving this market?

Fascinating sales statistics
The sales of DS Training for Adults exhibit a sales cycle that is far longer lived than most games. To understand why it is so unique, we need to understand the sales cycle of a typical game and the market forces at work.

A typical game title sales peak in the first week and then rapidly diminish to a mere trickle. The second week is often only 20% of the original sales. A title is lucky to spend 8 weeks on the retail shelves before being moved into the bargain bins.

There are several market forces at work here.

DS Training for Adults had a rather different sales curve. It started out slow and has stabilized at a steady rate of sales. Even though it was released in May 2005, it still managed to hold 8th place on the September 12th, 2005 Japanese sales list. Targeting the older non-gamers seems to be paying off.

Let’s look at some of the market factors involved

Successfully target an underserved niche with a meaningful product and profit. It is business 101, but most game developers were unfortunately never trained as traditional product designers.

Servicing the market need
Identifying a market opportunity is merely the first step. A game also has to provide a working solution. The market for DS Training for Adults presents several interesting design problems:

Game Mechanics
The designers of DS Training for Adults had some experience with the problem of productizing their research. The main author released several very popular books describing the research and various brain exercises. He also licensed his system to Sega in 2004 to create a portable quiz system that looked a lot like a small electronic dictionary. When it finally made it to the DS, there were several game specific mechanics that were added to make it more effective.

At its core, there is a simple risk / reward schedule driving the product.

The risk of our brains decaying is something that most of us live with every day. However, games have the ability to identify a risk and call it out in a very clear and effective manner. Simply by showing the player what is happening inside their brain, a primitive quiz game gains both a large carrot and a large stick for use in modifying the player’s behavior.

There is a lesson here about the strength of real world risks and rewards. You can certainly motivate people with abstract rewards. Our brains still react to getting a star or a few extra points on our final score. However, if you tie your risk / reward sequences into a meaningful real world goal, your low power psychological incentives become super charged. You see this with gambling games, with many sports that reward with real world social rank and with DS Adult training. A little bit of reality goes a long way towards improving the addictive qualities of your game.

Interface as a learned language
DS Training for Adults has a wonderful interface for its target audience. These are folks who rarely use computers and most likely never have played computer games. A traditional game interface is a giant barrier that could easily stunt the sales of the product.

I’m a great believer in the school of thought that user interfaces are a learned language. There is rarely anything inherently intuitive about an interface. Instead the best interfaces try to leverage existing knowledge about how a group of people prefer to interact with the world.

For example, in art programs, artists know that holding down the space bar changes your cursor into a hand icon that lets you drag the canvas about. This action has become so ingrained that it is purely muscle memory for most artists. If an art program comes out that lacks this feature, its UI is immediately lambasted as un-intuitive. It would be like knowing a common verb such as ‘drag’ but when you try to communicate, the other person just stares at you blankly. Heaven forbid, the program suggests an alternative verb such as “scroll bars.” No one wants to learn a new language.

In DS Training for Adults, the designers based the interface on a language they assumed their audience would know. Instead of pressing buttons, you jot down numbers much like you would in school notebook. For certain mini-games, you also can yell out answers and the game will use speak recognition to record your answers. The users of DS Training for Adult may not speak ‘Video Game-ese” but they are very likely to understand “Elementary School Quiz-ese”

There are a variety of additional tricks that are used to enforce the interface metaphor.

The result is amusingly enough, a game that is very intuitive to its target audience, but feels distinctly non-standard to the typical gamer. When you target new market segments, there is a natural splintering of the interface language that many designers have come to rely upon. Where the groups interact, expect to see misunderstanding and perhaps a culture war or two. I would pay money to videotape a typical DS Training for Adults purchaser as they read through a copy of EGM looking for additional brain training games.

From the flip perspective, I’ve seen DS Training for Adults described by the mainstream gaming press as “Not worth full price, since there are only nine different games to play here, but definitely a fun time-waster.” A review of a title intended for non-gamers by gamers will likely miss the point. It would be like a non-metrosexual male such as myself trying to write a cute shoe review. 🙂

Big Picture: When is a game a useful consumer product and when is it merely entertainment?
DS Training for Adults is what many people these days are calling a Serious Game. It takes the techniques of classic game design and applies them to a real world problem. Most Serious Games focus on teaching a particular real world skill to the player. DS Training for Adults is unique in that it claims that act of playing the game has direct health benefits. The basic concept is the same. Games are useful software products.

Serious Games are a new (or at least rediscovered) class of software that raises big questions about commonly held definitions of games. Many people, both game designers and game critics, have argued that games are inherently pointless. Our urge to play games is a remnant of our childhood, a pleasurable leftover behavior that is at best a luxury activity in our adult world. This attitude is pervasive and influences both the consumption and the designs of modern games.

Under this shallow philosophy, games become a series of disposable baubles that contribute nothing to society. As long as it is ‘fun’, a game is devoured by the sedated masses who demand only meaningless pleasure. If, by definition, there is nothing more to games, why try to create anything beyond mere candy?

I see titles such as DS Training for Adults and I must disagree with the concept that games are mere entertainment. There exists an entire universe of applications for quality game design that reach far beyond the current status quo. We need a new philosophy. Imagine instead that a game is ultimately a consumer product that services an identifiable need in the marketplace.

If we see a game as a software product, game design becomes a practical tool for solving real world problems. DS Training for Adults uses risk / reward schedules to turn the process of reducing dementia into an enjoyable and addictive experience. In my game design Space Crack, I use the same fundamental tools to create a product that helps long lost friends connect with one another. The possibilities are limitless.

When you start treating games as consumer products that serve real needs, you look at the process of designing games in a radically different light. It is not longer about one upping a current genre king with craftsman-style clone-and-polish techniques. It is about solving problems and making the world a better place. Not only is this idealistic and heartwarming, it also happens to be a great way to make money.

The good stuff
I would have a hard time writing a traditional game review for DS Brain Training for Adults. It seems a bit odd to attempt an objective review when there are really no other comparable titles on the market. Imagine you are tasked with reviewing an immortality serum. It is the only one that works, but it smells a bit funny. Do you knock off a star because of the smell? At best you can review it based off its effectiveness. Everything else is merely noise.

Luckily this is a design review. Here is a very brief run-down of some of the design elements I enjoyed in DS Training for Adults:

Conclusion
DS Training for Adults is a very different title than most of games on the market and it brings out some extremely fascinating lessons about game design. We covered the following concepts in this essay:

I hope to see many more titles like DS Training for Adults. Designers who pursue the goal of creating useful product will build entirely new fields of game design that expand well beyond the current pool of stagnant genres. I’ve said it before, but it is worth repeating. This is an exciting time to be a game designer. 🙂

Notes
There is one additional brain training game available in Japan. It is doing quite well but is still in second place. The established, pre-existing brand of DS Training for Adults seems to have been a critical factor in its capturing of the genre title crown.