Open Close
This weekend I had a chance to put together a little test rig for a revised interface I’m trying out. I had two goals. First I wanted to rectify some of the complaints about my first interface. Second, I was playing with some of the artistic bits based on the comments folks had in the earlier art thread. 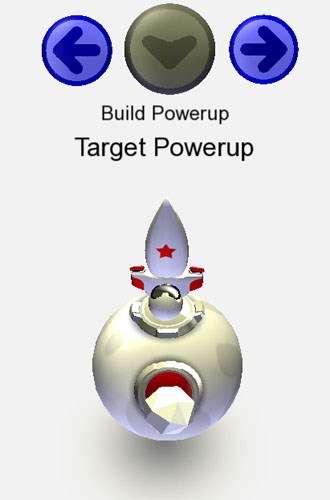 The Test Rig
I’m following the list laid out in my component bible. You quickly end up with lots of objects that all can be in any of a half dozen different states. Rather confusing to be honest. To keep everything straight, I whipped together a primitive menu that lets me sort through the components as I finish them.

Fixing the UI: The second pass
I had several issues with my first UI attempt.

The Art Style
The art should look at lot like the previous test exe. Really the only new model is the space ship. I tried to make something a bit sleeker than the Space Cute design, but still having a prominent character element that I felt was lacking in the 50’s iPod style.

I’m rather excited about the ability to use simple texture maps to change the look of the ships quite easily. There are two images, one for the helmet and one for the ship. By swapping these out, players should be able to get a huge range of different ‘team flags’. I need to spend some time cranking out some skins.