Intro
Over the years people have bemoaned the rise and fall of various gaming genres, but there has been little analysis behind the functional processes that drive this critical market systems.

Genres are a major defining factor in the creation of rich markets of avid gamers and designers ignore them at our own risk. We cannot assume that a genre will always exist, or that a genre will have competitive room for our latest title. A genre in the wane is a dangerous market where past success is no indication of future success.

Equally important is the opportunity that genres present. If we can understand how genres arise and change over time, we can tilt fate in our favor by releasing and developing new titles that hit emerging genres with the correct timing and release strategies. 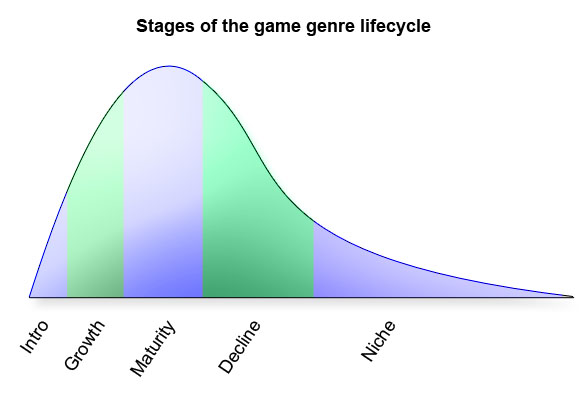 It’s all about the numbers
I have been guilty in the past of focusing on theory and not relying using a foundation of real world data to back up my discussion. Luckily, this the topic of genre evolution has a rich resource in the form of the MobyGames.com database. The database lists over 20,000 games across 55 platforms. Games range from 1978 through 2005 and are organized according to a wide variety of categories and sub-categories.

Though by no means perfect, I was impressed by the breadth and accuracy of the information I found within. The large quantity of games and the historically minded nature of the site’s contributors limits the ‘survivor’ bias that is common to data recorded after the fact. When possible, I double checked genre classifications against my personal recollection and other resources on the web.

Analysis
I choose adventure games, a genre that many claim as ‘dead’ and tracked it from its first recorded inception in 1978 until the last valid data point in 2003.

The primary focus was the number of titles released per year. I would have loved to use sales numbers or aggregate review ratings, but neither piece of information as publicly available in any reliable form.

(A great service to the game research community would be sales numbers for all games released in a particular time period. Unfortunately, the competitive realities of the game industry make this unlikely.)

Adventure Games: “I’m not dead yet!”
The initial graph I ran just looked at ‘adventure games’ as defined in the following fashion:

Adventure: Denotes any game where the emphasis is based on experiencing a story through the manipulation of one or more user-controlled characters and the environment they exist in. Game play mechanics emphasize decision over action.” – Moby Games

This was a good starting point and fit my preconceived notion of the traditional adventure game including classics such as King’s Quest or even Grim Fandango.

Surprisingly, the number of adventure games rises time goes on. I was expecting to see a precipitous drop at the end of the 1990’s. In fact, adventure games and their descendents are the second most popular genre as late as 2003.

Number of titles released in major genres in 2003

Genre Mutation
The major genres are by no means exclusive categories. On closer examination, day traditional plot driven adventure category has been mixed (or ‘cut’ in the language of gaming addiction) with game mechanisms from almost every possible alternative genre. There are strategy adventures, action adventures, etc. There are even racing-adventure games. (Beyond Good and Evil is one of the more interesting examples of this sort of genre-bending) The adventure game is dead, long live its mutant offspring.

Creating a useful definition of Game Genre
Much of this apparent growth in the adventure genre stems from poor classification. Let’s go back to the definition of a genre that we started to develop in the genre addiction article.

Game Genre: A common set of game mechanics and interface standards that a group of titles share. The common set of psychological risk/reward systems present in a game determine it’s membership in a genre grouping.

This is a rather rigid definition of genre, yet it explains much of life cycle trends the various genres. I hope to tackle the following topics with this particular definition:

Market Factors: It is all a wash
To be clear, I’m intentionally ignoring differences such as whether or not a game is a fantasy RPG versus a science-fiction RPG. I am well aware that platform, setting, and plot, and license are important secondary market factors. The contextual elements of a game design can make or break a specific game.

My initial assumption is that many of these factors are long term cultural trends that exist on a time-scale much larger than an individual game. Well delivered plot is eternally delightful. Visuals that fit the whims of the public are a development technique that was available to past designers as well as future designers. Smart developers across multiple genres will always take advantage contextual elements to increase their sales.

The point is I’m assuming that developers will execute on all these contextual elements equally well or badly in some statistically uniform distribution. I’m taking the grand bet that these factors are a wash when it comes to examining the lifecycle of various games genres. In fact, my initial look at the problem using aggregate game rankings shows same basic normal distribution of game scores within any genre at any point in time.

Modeling: “Imagine a spherical cow”
So why focus on game mechanics as the defining factor? Because we can. According to the game design layers theory, core game mechanics are the most tangible, well-defined aspect of a game. We are going back to the basics and seeing what that gets us.

In physics, we have a joke that sums up this attitude quite nicely. A man asks a physics professor how long it would take for Holstein cow dropped from a 747 to hit the ground. The professor replies “First, let us assume a spherical cow…”

Sometimes we need to simplify a complex real world situation in order to begin modeling it. My hope is that this simple mechanics-based definition of game genres will provide substantial insight into how genres grow, evolve and eventually fade away.

Other Game Design Layers
The above definition takes care of almost any text adventure I came across in during data collection. We can talk about contextualized objects, plot, etc, but these vary dramatically across games in the genre without giving us too much additional insight.

Notes on the Genre Definition
When defining the basic elements of the game, I’m splitting up the core game mechanics into two groups:

Immediately, we run into an interesting discovery about reward systems. The physical form of the reward system appear to matter greatly in the definition of the genre. In this case ‘plot’ arises as a reward mechanism. As we look at additional genres, we’ll be able to make some conclusions about how different reward systems affect the addictiveness of the title.

A side note on plot. When you start thinking of games using mechanics-based definition, eternal debates such as the importance of story become very clear cut. Plot points are merely one of the many forms of reward that the designer has in their tool box.

I graphed the number of titles released in a particular year using frequency polygons. The data was culled from an automated search on Moby Games and then compared to my above definition to make sure that each title fit.

We can see five clear phases of the genre lifecycle. These correspond with the typical product lifecycles you would see in most consumer categories, with some key differences.

The first four phases are quite standard product phases. The last phase ‘niche’ occurs in many products, but is worth calling out due it’s impact on indie development design decisions. Let us see if this pattern holds in other genres and if we can glean any addition insights from it.

Notes on the Genre Definition
The major apparent shift here is in the reward system. The introduction of graphics provides a more intense reward for the player.

This graph was generated in the same method as before. It was a bit more interesting coming up with the data this time since the adventure genre was in full evolutionary explosion. The graphic adventure may be the clearest descendent of the text adventure, but it was not alone.

Examples of each of these emerge in the early 80’s and some have a strong market presence even today. (A delightfully future project would be creating a chart that shows the evolutionary relationship of historical genres. Unfortunately, the query engine of Moby Games is limited in the current iteration and I did not have the ability to cull through the thousands of games in the database in an efficient fashion.)

Text adventure were some of the earliest games and peaked in popularity in the mid-80s. Graphic adventures came into existence shortly after the text adventure, but peaked in the early 90s.

It is impossible to determine an exact causal relationship, but graphics adventure arguably supplanted text adventures.

Terminology
I’m starting to build up a list of specialized terms from my previous essays. Here is a short cheat sheet